Controversy over the sudden removal of shops without any notice by the protesters over the removal of shops: Outrage spread among the locals over the loss of land and the grief of unemployment, now forbidding the system to do business. 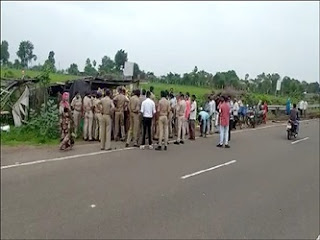 Rajpipla: Some poor people were running their livelihood near Ekta Dwar in front of Kevadia Colony railway station in Garudeshwar taluka of Narmada district. There was a scuffle between the shopkeepers and the authorities. There were also scenes of verbal brawls. There have been many such scenes in the area in the past which have led to frequent clashes between the villagers and the police.

Adjacent to the Garudeshwar main road from Kevadia and losing land to locals who did not even get employment, there was a controversy over the sudden removal of Lari Galla without any notice. They are also saying that if you provide employment, we will not do business.

Thousands of locals from Kevadia, Gabhana and other villages started setting up tea and snack lorries on the main road of the statue every Saturday and Sunday after all the projects including the Statue of Unity were opened. Officers Garudeshwar Mamlatdar along with local Statue of Unity Authority police and Narmada police from Rakhi Gabhana to Kevadia police station did not obstruct anyone’s business.

Officials of the Statue of Unity said that nothing can be done without your permission. Meanwhile, there was a general altercation between the shopkeepers and the officials. Currently waking up.

Dinesh Tadvi, Chairman, Narmada District Panchayat Justice Committee, said that the local tribals are being treated unfairly by the authorities. Where is all the development? Will solve but the issues related to employment should be solved at the local level. That is our right. My demand to the government is that talks are going on with the government to increase the package. Harassment of the people should stop till a decision is reached. People are living in mental trauma. Give employment to the families who have lost their land.

No comments to show.

Iconic One Theme | Powered by Wordpress