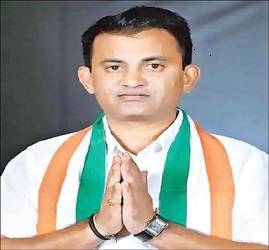 In this regard, Gujarat Pradesh Congress Committee President Amit Chavda and Vidhan Sabha Congress Party leader Paresh Dhanani said that with the price of recession, inflation, epidemic, unemployment and insecurity, the people of Gujarat are living their lives in a very difficult time. In these difficult times, people should get help from the government. Instead, the BJP government has been squandering the people’s tax money to applaud its failed rule.

The government should be ashamed of its failed regime. Instead, she is going to have a nine-day celebration to celebrate. In order to give voice to the aggression, confusion, grief, feelings and demands of six crore citizens of Gujarat, the Congress Revolutionary is going to conduct a nine-day “Jan Chetna Abhiyan” program in the month of August.

We are going to launch an insensitive government “Save Health Campaign” on August 2 to expose the looting of millions of rupees in private hospitals and the failures of the BJP government in the Koro epidemic. In the same way, we are going to conduct “Mahila Suraksha Abhiyan” on 4th August so that women power of Gujarat can live with dignity and security on 2nd August. We are coming up with “Farmers – Save Agriculture Campaign” on 5th August to address the injustice being done to farmers.

There are more than 40 lakh unemployed youth in Gujarat. Then we are going to launch “Unemployment Eradication Campaign” on 6th August with the aim of giving employment rights to the youth of Gujarat. The program will be held on August 7 under the banner of Vikas Khoj Abhiyan. In the same way, the 8th August Jan Adhikar Abhiyan i.e. the people are coming up with a program on the right to get the facilities against the taxes they pay.

August 9 is Revolution Day and Tribal Day. On this day, the Congress party will launch a social revolution campaign on the occasion of World Tribal Day.

He further said that the anti-people and corrupt policies of the BJP government would be exposed through the program in the form of a campaign for the rights of all the students, youth, women, farmers, Scheduled Castes, Scheduled Tribes and Bakshipanch of the Congress party.

No comments to show.

Iconic One Theme | Powered by Wordpress